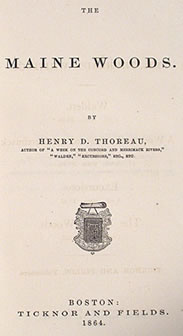 ON THE 31ST OF AUGUST, 1846, I left Concord in Massachusetts for Bangor and the backwoods of Maine, by way of the railroad and steamboat, intending to accompany a relative of mine engaged in the lumber-trade in Bangor, as far as a dam on the west branch of the Penobscot, in which property he was interested. From this place, which is about one hundred miles by the river above Bangor, thirty miles from the Houlton military road, and five miles beyond the last log-hut, I proposed to make excursions to Mount Ktaadn, the second highest mountain in New England, about thirty miles distant, and to some of the lakes of the Penobscot, either alone or with such company as I might pick up there. It is unusual to find a camp so far in the woods at that season, when lumbering operations have ceased, and I was glad to avail myself of the circumstance of a gang of men being employed there at that time in repairing the injuries caused by the great freshet in the spring. The mountain may be approached more easily and directly on horseback and on foot from the northeast side, by the Aroostook road, and the Wassataquoik River; but in that case you see much less of the wilderness, none of the glorious river and lake scenery, and have no experience of the batteau and the boatman's life. I was fortunate also in the season of the year, for in the summer myriads of black flies, mosquitoes, and midges, or, as the Indians call them, "no-see-ems," make travelling in the woods almost impossible; but now their reign was nearly over.

Ktaadn, whose name is an Indian word signifying highest land, was first ascended by white men in 1804. It was visited by Professor J. W. Bailey of West Point in 1836; by Dr. Charles T. Jackson, the State Geologist, in 1837; and by two young men from Boston in 1845. All these have given accounts of their expeditions. Since I was there, two or three other parties have made the excursion, and told their stories. Besides these, very few, even among backwoodsmen and hunters, have ever climbed it, and it will be a long time before the tide of fashionable travel sets that way. The mountainous region of the State of Maine stretches from near the White Mountains, northeasterly one hundred and sixty miles, to the head of the Aroostook River, and is about sixty miles wide. The wild or unsettled portion is far more extensive. So that some hours only of travel in this direction will carry the curious to the verge of a primitive forest, more interesting, perhaps, on all accounts, than they would reach by going a thousand miles westward.

The next forenoon, Tuesday, September 1st, I started with my companion in a buggy from Bangor for "up river," expecting to be overtaken the next day night at Mattawamkeag Point, some sixty miles off, by two more Bangoreans, who had decided to join us in a trip to the mountain. We had each a knapsack or bag filled with such clothing and articles as were indispensable, and my companion carried his gun.

Within a dozen miles of Bangor we passed through the villages of Stillwater and Oldtown, built at the falls of the Penobscot; which furnish the principal power by which the Maine woods are converted into lumber. The mills are built directly over and across the river.